Top 10 Deadliest Snakes in the World

Top 10 Deadliest Snakes in the World

This is our list of the top 10 deadliest venomous snakes. Keep in mind that the most venomous ones aren’t necessarilly the deadliest ones to humans. There are other factors to consider. 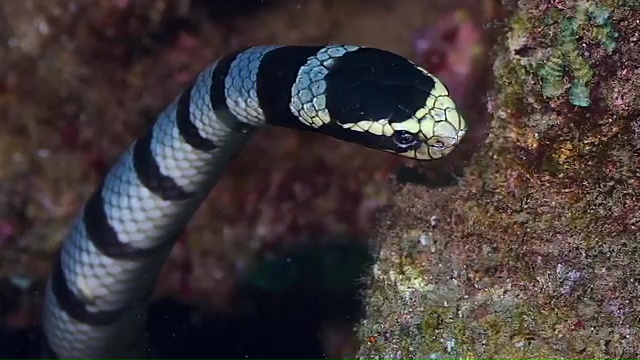 This creature is the most venomous ocean snake. It roams the waters around Papua New Guinea, New Caledonia and the northern eastern and western coastline of Australia. The live among coral reefs and areas with dence underwater vegetation. It`s a relatively shy creature and it wont attack humans unless provoked. They have flat paddle shaped tails which make them excellent, very fast swimmers. If you found yourself in the water and you really pissed off one of these there`s no way you could get away by swimming, but this is a highly unlikely situation. The reason its only number 10 on our list is the fact that it rarely encounters humans, apart from the occasional fisherman. 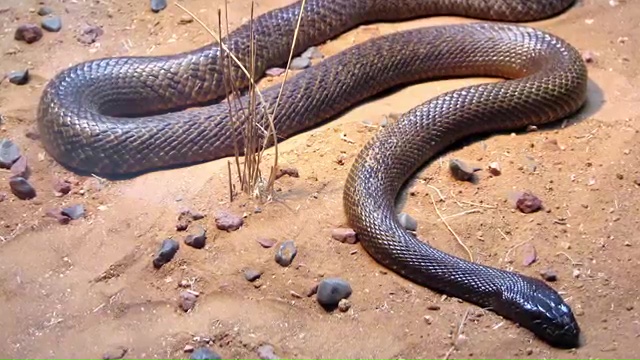 Remember when I mentioned that venom isn`t the only thing that determines the deadliness of a snake.The Inland Taipan is a perfect example for this. It lives in remote areas of the Australian outback and it`s not aggressive by nature at all. If it came into contact with humans and if it was easy to provoke it would be number one on our list. Why? Because the Inland Taipan, quite simply, posseses the strongest venom of all snakes on the face of the earth. It makes all other snake venoms look like holy water. For example the world`s second most venomous snake has enough venom, on average to kill 58 people in one bite. How many people do you think a Taipan can send to an early grave with the same amount of venom? 289. The first man to capture a Taipan alive, got bitten in the process and died the following day. So, if you go looking for an Inland Taipan, for some reason… bring lots and lots of antivenom. If you don`t you wont have the time to drive to the nearest hospital…..and that will be the end of you. But as I said before, it’s a docile snake and it almost never encounters humans. Thank God for that. 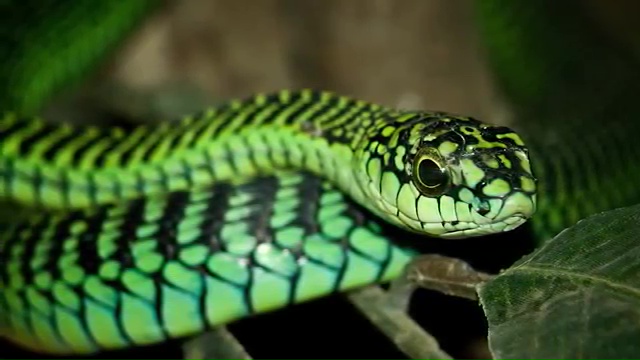 This little green creature is the most skilled climber of all snakes. It can often be found slithering across tree branches looking for it`s favourite meal. Baby birds. This thing literally survives and thrives by raiding nests. Its danger to humans lies in the fact that it`s nearly impossible to spot in dense vegetation, and people who pick fruit in orchards are the most common victims. The other thing one must consider if bitten by a Boomslang is it`s slow acting venom. It could take many, many hours for any symptoms to become noticeable, and many people will just feel relieved, thinking they were bitten by a harmless snake or that it didn`t inject them with any venom whatsoever. Any snake can control its flow of venom accurately. It can choose not to inject it when biting. This is called a dry bite. However, when you do feel the symptoms of the bite, it will most likely be too late. The venom is an insanely strong hemotoxin meaning that it causes internal and external bleeding. People bitten by this thing would start bleeding from the nostrils, the mouth, even the eyes. Internal haemorage would follow soon after…your major organs would bleed heavily… even the brain. Death would occur after hours of agonizing torture. 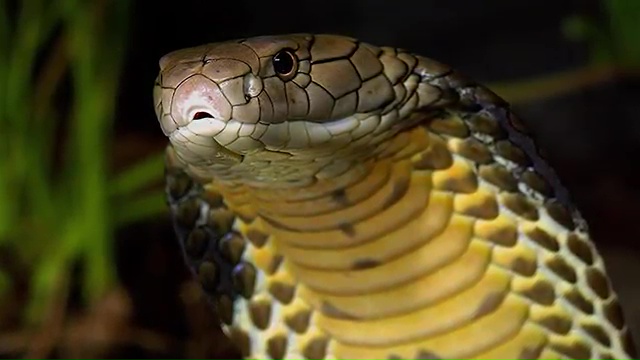 The longest, and largest venomous snake in the world, the King Cobra is a terrifying site. It can be found in the dense jungles of India, it rarely ventures into human settlements but despite all this, it still claims its fair share of victims. It can grow up to 6 meters in length, and it`s powerfull muscles allow it to extend it`s body vertically, sometimes enough to look a 2 metre tall man in the eye. This allows it to deliver bites to the face and neck, and these are the most difficult to treat and the proximity of the bite wound to the brain and heart make them really, really dangerous. Most snakes can store 100 – 200 mg of venom in their glands and fangs. The king Cobra, in proportion to it`s massive size, can store up to a whopping 600 mg. Only 20 mg are enough to kill an adult. These giant snakes are even known to bite very large animals if they feel threatened by their proximity. Some have even bitten fully grown Indian elephants that died after only 3 hours after envenomation. 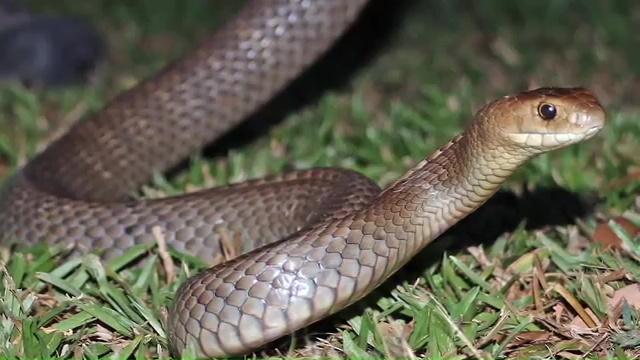 Found in Australia, this is the second most venomous snake on the planet. Unlike the Inland Taipan, which holds the number one position on the list of toxicity, The Eastern Brown is aggressive, bad tempered, and doesn`t hesitate to enter peoples homes in search of mice and rats, which form the basis of it`s diet. They have been known to chase people out of their houses simply claiming them as their territory and hunting ground. It hunts during the day which makes encounters common, and the only reason why it`s number 6 on our list, is Australia`s efficient distribution of antivenom. Bites from the eastern brown snake are countless and common, but in most cases timely medical assistance prevents otherwise imminent deaths. 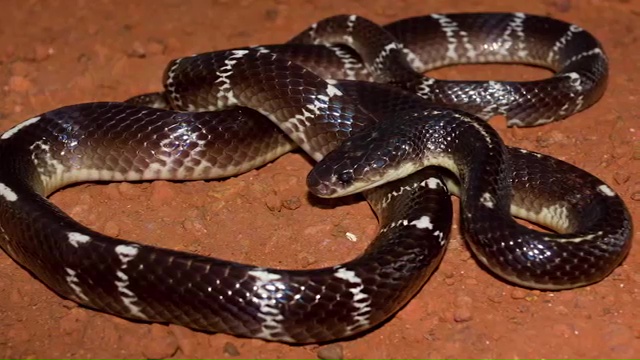 Also known as the Blue Krait, or Indian Krait, It is found in the jungles of the Indian subcontinent. It inflicts more bites on people in India than any other snake species. Most snakes strike their prey quickly and then move to a safe distance, letting the venom do it`s work. Not the Krait. It likes to bite and hold on to its victim, giving it more time to pump a lot of venom into it`s body. During the rainy season, they like to take refuge in dry homes, inevitably coming into contact with people. If you get bitten by a Krait while sleeping, there`s a good chance you will never wake up. 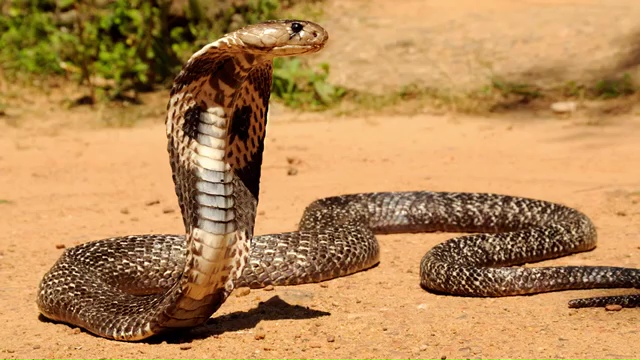 The Indian Cobra, also known as the Spectacled Cobra due to the characteristic shape on the back of their heads, is another one of india`s fiercest snakes. This particular snake is revered in India`s mythology and is often seen with snake charmers. Most adult specimens grow to lengths of 1 to 1,5 meters, but for some reason, on rare occasions they can grow considerably larger than 2 meters, but only in Sri Lanka. We don`t know why. They like water, and can usually be found near rivers or ponds. The most common bite victims are farmers, especially those working in rice patties. Its venom consists, in part, of cardiotoxins which can, if left untreated, cause respiratory failure or even cardiac arrest. 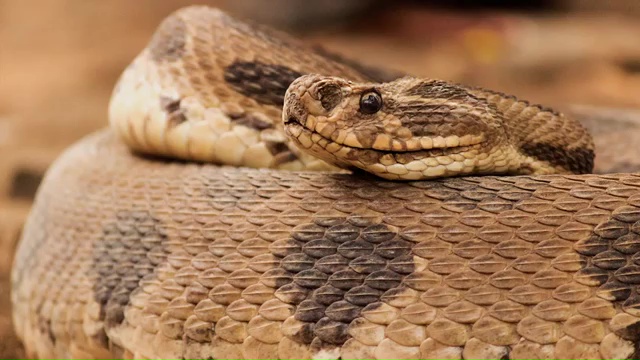 Another native of India, This species encounter and bite people very frequently. They are clever animals who will do whatever they can to warn you to stay away from them. As you approach, they will start to hiss loudly, perhaps louder than any other kind of snake, and they will start clinching their muscles, appearing larger and more menacing. Take a look. They are mostly active at night. If you come across one of them, and you see that it feels threatened by your presence, you might be able to save yourself by running due to them being slugish and slow moving. Provided of course that you don’t venture to close before you spot them Their strikes are lighning fast, far faster than any human reflex. Apparently, this snake has such a fierce reputation within it`s natural enviorment, that other species evolved ways of mimicking it`s appearance, hoping to fool predators into not messing with them. The Rough Scaled Sand Boa, for example, has very similar coloration and skin patterns but can easily be distinguished by the smaller size of its eyes and a somewhat differently shaped head. 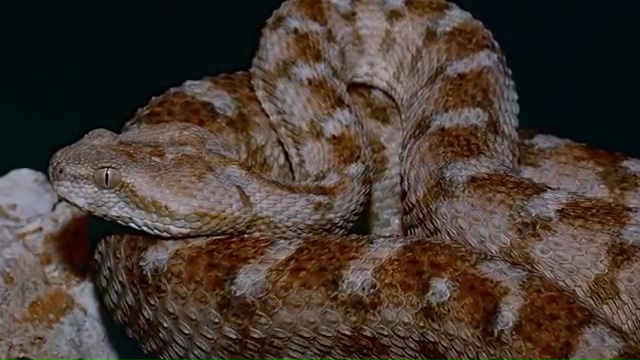 This tiny cousin of the Russel`s Viper is only made deadlier by its unremarkable size. Their average length is 60 cm, but some adults can be as short as 30. Most people cannot hope to spot them before it`s too late. They are not just small but they also blend easily with their enviorment. The venom of the Saw Scaled viper is 16 times stronger than that of the Russel`s Viper. And it`s very eager to inject it when provoked. And it doesn’t take much to make it mad. It has enormous fangs in proportion to its body. It`s a very widespread species commonly found in Pakistan, India, Iran, The Arabian Peninsula, The Middle East and most of Africa. It has I mean these things are just EVERYWHERE! 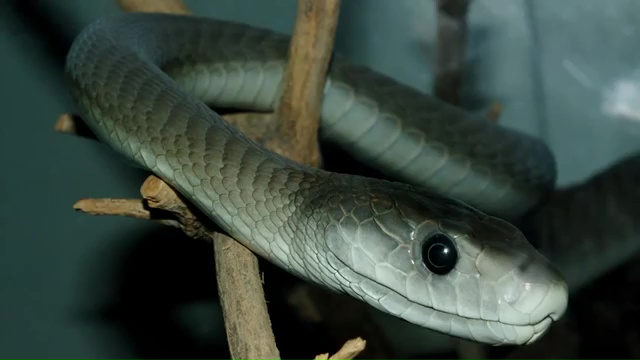 This is the most feared snake in the world. And for good reason too. It`s the most aggressive snake on the planet, regularly biting even professional snake handlers, it has huge fangs, deadly venom, and it strikes with deadly precision. It’s the second longest venomous snake in the world behind the King Cobra. It`s also the world`s fastest snake. It moves faster than most people can run and it is possible that one would start chasing you if it felt you were trespassing in its territory In a threat display, the Mamba usually opens its inky black mouth, spreads its narrow neck-flap and sometimes hisses. It is capable of striking at considerable range and occasionally may deliver a series of bites in rapid succession. Most snakes consider one bite to be enough but not the Black Mamba. It has been known to strike 5 or even 7 times in quick succession. They never deliver dry bites to their victims and before antivenom, the mortality rate was 100%.

10 Most Venomous Snakes on Earth

Top 5 Most Venomous Spiders in the World

Top 5 Stars That Put Our Sun to Shame

Top 10 Amazing Facts About the Sun

10 Interesting Facts About the Sun

Top 10 Ridiculous Science Myths You Were Told Growing Up